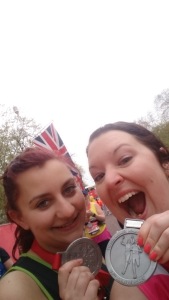 Well it has been a huge journey from couch potato to marathon finisher but here we are.  I cannot lie to you, as a non-runner it was horrendous (in the main part).  Six months of training outside through the delightful English winter months in ice and wind for hours, eating differently, virtually no drinking (4 glasses of wine and 6 g&ts consumed so far in 2015!) or going out in April… for one day of hell.  Ha.  The question you are asking is, was it worth it?  Hmmm.. I have enjoyed limited success and not all of it was as hard as marathon day.  When I set out to do this, I wanted to get around without having a heart attack and walk away with a finisher’s medal and I have now achieved that lofty ambition.  As for the day itself, nothing at all went to plan – I started right at the back then made the mistake of a loo stop immediately, spent the first 7 miles dodging the ‘sweep up’ bus (which at about mile 17 seemed like a very attractive way of finishing the race)… I made up time and pace with a good time for my first 13.1 miles (half way) but I had forgotten just how much the long distance running hurts and to be perfectly honest I just actually hated it so much I cannot tell you.  The first 15 miles were hell.  Hated them.  I enjoyed between 16-22 miles, then I was in serious pain and decided to walk most of the last 4 miles.  Fortunately I met a lovely fellow runner/sufferer Chloe and we decided to walk together and chat our way along the route. 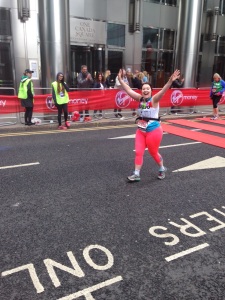 The support was astonishing, the crowds were terrific; even if I wanted to kill them all for the first 15 miles – smugly enjoying their drinks and bbq’s whilst I suffered on with no toilet breaks after that first one until mile 17 or so.  My own supporters were amazing; I saw them all the way around and I cannot thank them enough for being there for a hug when I needed it, though I would not be drawn to tears over a stupid marathon as some were (I did feel sorry for a few runners who were very emotional about it all).  I was cross (as my good friend Lisa correctly identified) that things didn’t go better on the day and that I was in so much pain.  But you know what, having now recovered to a point with wonderful hugs with my fabulous friends at the end, a shower, big steak dinner with the incredible Price’s and three baths (one cold) later; I am finally starting to feel less dead and more like myself, I am able to sit on the sofa in my finisher’s t-shirt and be proud that I got around and raised even more than my target for the King’s College Hospital Cancer Unit.

I am glad that I did not give in and get on the ‘sweep up’ bus but continued along that very tough road to The Mall.  This whole experience, for me, has been a love letter to perseverance and endurance; it is good to push yourself to the limit sometimes and see how far you can go.  I am not pleased with my time 6hrs42 but I am pleased that throughout the last six months I did not give up as (if we are honest) so many people thought I would.  If I had realised at the beginning just how physically and mentally exhausting this would be, I would never have signed up for it…perhaps on rare occasions ignorance is a good thing?

I did some karaoke running; trying to make those around me laugh with tunes such as Don’t Stop Believin’ and we had a great moment in the tunnel coming onto Victoria Embankment where a DJ played Take That’s Never Forget and we sung along and danced together, remembering just exactly how far we had come on our marathon journey in every possible sense.

My enduring memories of the day are;

When you think of it like that, makes you feel that you are part of the greater London Marathon story which started for me as a child going down to Woolwich in the 1980s and seeing Seb Coe run by, now I can say I have run in the same race as Paula Radcliffe and raised money for a terrific Hospital.  Job done I think, now it’s time to bring on the Spa !